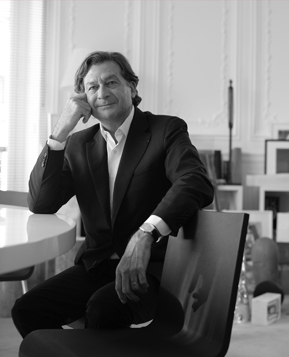 It is from his origins in Dieppe, and his fascination for the sea and the milky alabaster of the coastline that Bruno Moinard developed his love for light, for strong, simple lines, transparency and the essence of things.

A graduate of the French National School of Applied Arts and Crafts, he began his career in 1979 with several prestigious collaborations, notably within the agency Ecart International, founded by Andrée Putman, before founding in 1995 his own interior design studio, 4BI & Associés.

Minimalism with warmth, simplicity without austerity, elegance, and timelessness are some of the qualities defining the work of Bruno Moinard. His work highlights a very personal approach to luxury, a focus on softening the effects, making behind-the-scenes elements precious and remarquable, mastering the art of detail and finish.

For his apartments and private houses, grand hotels, luxury stores, public spaces and scenographies, Bruno Moinard puts all his heart and passion into the working of light, the key to everything.

In 2002, the Maison Cartier entrusted him with the new concept and development of its boutiques all over the world. Today, 450 boutiques have been created within a partnership as strong as ever.

In 2014 the first Bruno Moinard Editions furniture collection was launched followed by the opening of the Parisian Gallery, located 31 rue Jacob in Saint-Germain-des-Prés.