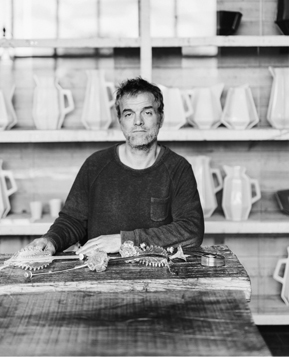 Piet Hein Eek was born in Holland in 1967 and was graduated from the Academy for Industrial Design in Eindhovan in 1990. While at the Academy, he gained attention for his exam project Scrap Wood Cupboards. He sold all of the cupboards and used the money to start his own design studio in 1992. The following year he went into partnership with fellow designer Nob Ruijrok, establishing Eek en Ruijgrok v.o.f. Eek first developed an interest in old materials after restoring a cupboard for his sister; he thought the old wood looked nicer than the new. He has built his business around old materials, saving these discarded pieces of wood and working outside of the circuit of mass production.

Piet Hein Eek’s work is sold in numerous galleries worldwide. He has exhibited at such venues as the Museum of Modern Art, New York; the Milan Furniture Fair, Italy; and Cïbone, Tokyo.