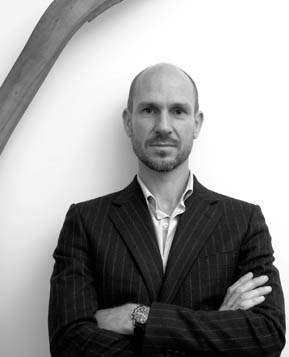 Tristan Auer is a trained interior designer, graduate from ESAG in Paris since 1996. He collaborated with Christian Liaigre, then with Philippe Starck for four years during which he worked on numerous projects throughout the world; from Taschen bookstore, rue de Bucci, Paris to the hotel-club for the Trigano family. It was with Christian Liaigre that he produces his first large scale international project: The Mercer Hotel in Soho New York.

In 2002, Tristan Auer founded his agency.

Karl Lagerfeld contacted him directly for private residential projects. The Master of rue Cambon also commissioned Tristan Auer with the creation of the new haute-couture salons at the very place of the mythic salons Chanel.

He completed the boutique Nina Ricci Avenue Montaigne Paris as well as interior design identity for all the outlets of the famous French couture house. At the same time, he conceived a private residence on the island of Mustique and his first line of furniture.

Today, his projects include houses for Francois Henri Pinault and other leading business and entertainment clients, worldwide. He also contributes to the development of the image of established luxury hotel and real estate brands, always bringing French «savoir faire»