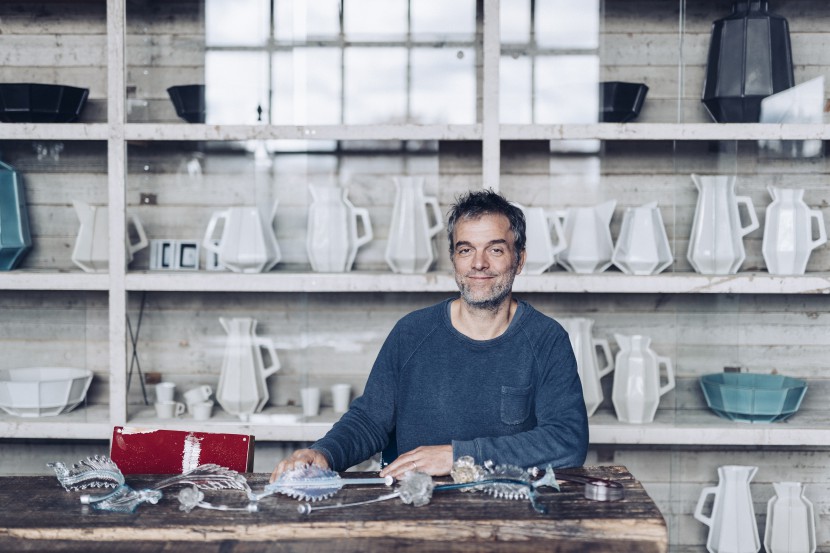 A Different Kind of Collaboration

Just over a year ago, our Creative Director, Ruben Jochimek, was sitting in our Paris archive room, admiring the thousands of iconic pieces of Murano glass sprawled across dozens of shelves. Almost nine decades of Murano glass design lied across the shelves. Mr. Jochimek wanted to create something new with the pieces and he chose Dutch designer, Piet Hein Eek, to lead the way.

Veronese set up the archive, as part of its workshop in 1931, when the company was established. It is where we store the extra Murano glass pieces that we created for each design throughout the decades. The pieces were used as replacement parts or for restoration projects. Today, we have accumulated an endless array of treasures of Murano glass pieces in a rainbow of sparkling colors and textures. There are pieces that were designed by Andre Arbus; other pieces designed as part of chandeliers that adorned historical palaces, luxury cruise liners and more; and, there are pieces that were created via techniques that are now obsolete. Each piece tells a story.

Famous for using waste, scrap, and leftover materials to design furniture, Piet Hein Eek was the obvious choice for Mr. Jochimek to collaborate with. After a quick email with photos of the archive, a meeting was set. When Mr. Jochimek got to Eindhoven, where Mr. Eek’s design studio is located, he discovered “The Piet Hein Eek Universe” that he previously read about. Piet Hein Eek created an inspiring design world that includes a large-scale open design studio, a manufacturing center where all his designs are made, a restaurant, art gallery and a boutique.

The meeting between our Creative Director and Piet Hein Eek was a bit of an adventure. They discussed Veronese’s history, admired samples of Murano gems from our archives, and threw potential design ideas onto the table. Piet Hein Eek then led Mr. Jochimek on a tour, which ended in the art gallery where they shared their admiration for art. They shook hands, and the Piet Hein Eek Collaboration began.

Since that first meeting, Eek and our Creative Director have worked together to create more than just a lighting collection. They have created a design concept, inspired by Meccano. The designs consist of several moving parts that can be mixed and matched to create and recreate a chandelier, over and over again. Each product will include Murano glass pieces handpicked and positioned, like flowers for a bouquet, by Piet Hein Eek, from the Veronese archive. Once the chandelier is suspended, one can easily move the pieces of Murano glass around, change their order and choose new patterns – extending the creative process. It is a never-ending creative journey initiated by Piet Hein Eek and that can be continued by anyone with the slightest bit of curiosity.

When Daniel Rozensztroch, the Creative Director of the Paris concept store named Merci, learned about the Veronese–Piet Hein Eek collaboration, he invited us to launch the designs at Merci. This will be just in time for the holiday shopping season, the launch will take place this month, at Merci in Paris. We are looking forward to this, very different, collaboration to come to fruition this month and to share the excitement with everyone.